Where are we failing?

Where  are  we  failing? 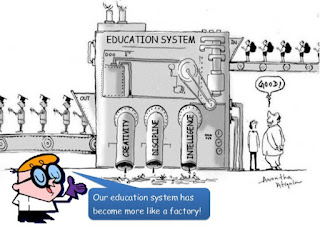 Does getting grade A+ certify success in life?

Does an exam failure indicate failure in life? Does higher education is a surety for getting job?

Answer to the above mentioned questions, is an absolute No. One out of every three graduates is unemployed in India [1]. Thus, higher education can never be considered as a surety for jobs in India. School/college dropouts would never have been able to reach the zenith of success if passing an exam is considered as a pre-requisite for passing in life.

India is often named as the youngest nation with 50% of its population below the age of 25 years. Youth in itself is a symbol of freshness and rejuvenation. Thus, it comes as a paradox that this young country is still subscribing to colonial era education system.

This youth of India will surely hunt for jobs after graduating and clearing all the parameters set out by mighty system. That’s what, our education institutes are supposed to do and they are doing it exceptionally well. They are building chains of service providers to serve in various services sectors. In simple terms, these educational institutes are aiming, aimed and will always aim to launch the army of job seekers and not the creators.

Scenario will surely become troubling with high rate of unemployment. Various government initiatives for promoting skill development and encouraging entrepreneurship beautifully highlight the requirements for a developed India. Obsession with information is precisely the major drawback of our system. Commercialization of education is flourishing a new kind of business in the name of coaching centers or tutorials, extra courses and so on.

Existing education system is promoting a useless competition that will benefit none but the stakeholders. Students are made to run after marks as their ultimate goal. Out of box thinking is rarely cultivated in these excessively academic institutions. Spirit of questioning is not installed in their operating system. Students often accept things as such without even questioning and analyzing. In simple English, this process is known as cramming. They are made habitual of constant pressure that is being projected on them by regular tests, exams where their brilliancy is graded and advertised.

Education is surely a fundamental necessity in the formative years of an individual. But, the wrong kind of education poses a serious threat against a promise for developed India. Where one’s future is predicted on the basis of his report card and creativity is suppressed before it blossoms, it becomes critical to evaluate the system. After introspection, one major question acquires the center stage i.e. Where are we failing and who is failing us? Inability to pursue one’s dreams; increasing suicide rates; high unemployment rate; lack of innovators, discoverers and entrepreneurs are regular answers to this major question. We are failing to properly harness and channelize our country’s talent.  Hence, our children are not failing; it is the system itself that is failing our children.
“Education is not the amount of information that is put into your brain and runs riot there, undigested, all your life. We must have life-building, man-making, character-making assimilation of ideas. If you have assimilated five ideas and made them your life and character, you have more education than any man who has got by heart a whole library.”
Swami Vivekanand [2]